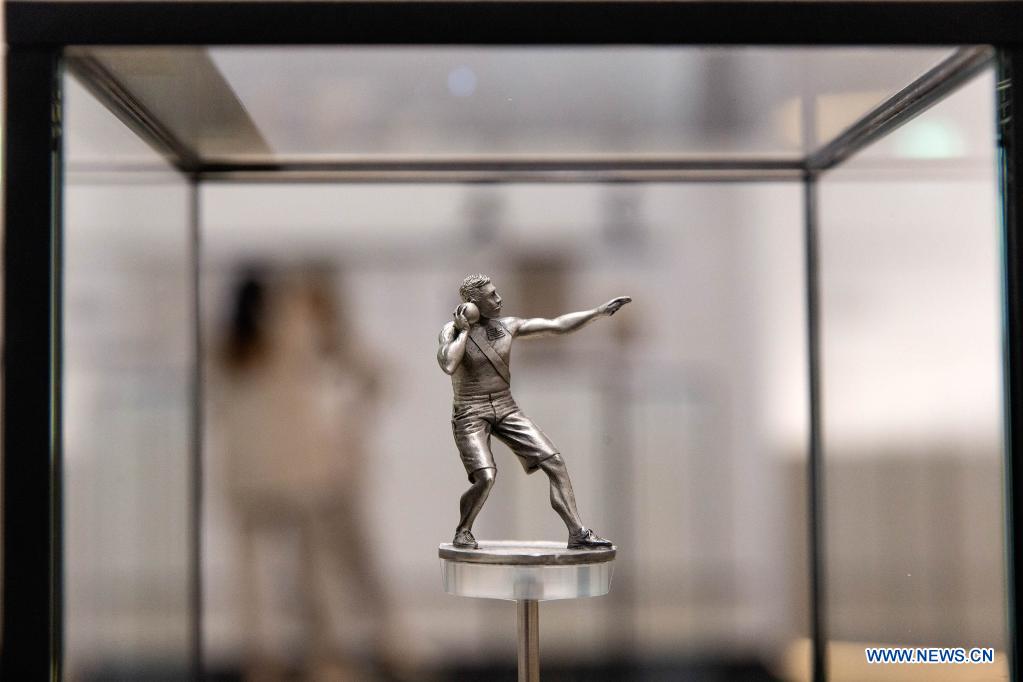 ATHENS, May 30 (Xinhua) — The Athens Olympic Museum, one of the latest additions to Greece’s long list of museums, opened its doors to the public this month, showcasing the history of the Olympic Games and Greece’s special role in the Olympic movement, as the birthplace of the Games.

Housed on the premises of Golden Hall shopping center in the northern suburb of Maroussi, it is connected via a footbridge with the Olympic Athletic Center of Athens “Spiros Louis,” the main venue of the Athens 2004 Olympic Games, offering visitors an unprecedented experience: A journey through the long and glorious history of the Games through a chronological narrative.

The museum’s permanent exhibition illustrates how the Olympic Games evolved through time, highlighting three important Greek-centered themes and periods: the birth of the Olympics in ancient Olympia, in the Peloponnesian peninsula of Greece some 2,500 years ago, their revival in the 19th century with the first modern Olympics in Athens in 1896, and the return of the Games to their homeland, with the Olympic Games of Athens in 2004.

The physical exhibits, like documents, original medals and items donated by Greek Olympic and Paralympic athletes, private collectors and members of the Olympic family, are presented with the support of new technologies, ranging from videos, animation, interviews, graphic displays, display screens and interactive applications (in Greek and English), creating a unique atmosphere.

Inside the hall that represents the stadium of ancient Olympia in scale, one feels like traveling back in time, watching athletes competing.

“Here are the descriptions of the sports, the rules under which the contests were held, the judges, and this side (of the exhibition) is dedicated to victory and the winners,” Maria Papaioannou, General Manager of the Athens Olympic Museum, told Xinhua during a recent tour.

After sections narrating the end of the Games in the fourth century, their revival in the 19th, and halls presenting torches and memorabilia of all the modern Olympic Games, the next stop is the hall which is dedicated to the Athens 2004 Olympics.

“In this collection, there are authentic costumes from the opening ceremony, the torch and all the authentic items of the Games and all the distinctions achieved in 2004. One of them is the map depicting the journey of the torch relay,” Papaioannou said, noting the relay started from ancient Olympia and returned to Athens again after traveling through the five continents for the first time.

In the last big hall dedicated to Greek athletes and modern Olympic sports, the goal is to inspire visitors to struggle and progress in life.

“The hall is full of heirlooms and personal memorabilia of Greek Olympic and Paralympic athletes. They decided to donate them to the Olympic Museum of Athens so that the young children who come to visit it will be able to see the exhibits, get an example and have a healthy role model to follow and compete in their lives,” Papaioannou stressed.

Special tribute at the museum is paid to the principles and values, the structure and purposes of the international Olympic movement, the organizations and institutions related to the Olympic Games.

The museum’s aim is to promote the ideal of world peace, the measure of truce as a cultural imperative worth fighting for, the concept of fair play and struggle, and one’s constant effort to surpass him/herself in all sectors of life.